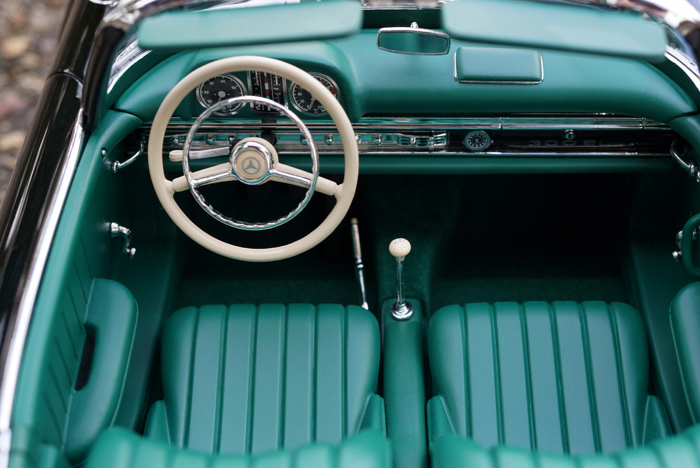 I recently went on a tour of the Mercedes-Benz Museum in Stuttgart, Germany, and couldn’t believe what I saw. Innovation and courage were on display as early automakers transformed how we move through big and small improvements over time.

I know what you’re thinking: I don’t care about cars. Well, to be honest, me neither. But I still went on the tour and found it fascinating. I also learned a few things from Mercedes-Benz and the evolution of cars.

The Evolution of Cars

You likely know this, but one hundred forty years ago, THERE WERE NO CARS. People were riding around on horses or in carriages pulled by horses. Just imagine it. There were horses, food for horses, horse poop (and related smell), the slow pace of horse travel, and the weather dictating your ability to go anywhere.

Most people couldn’t even imagine a better way to get around. Then, Carl Benz created the very first gas-powered vehicle in Germany. In the first five years, they sold 25 cars. Yes, you read that right. They sold 25. Each car was custom-built and incredibly expensive.

“Love of invention will never die .”

The first car was a fantastic invention, but by today’s standards, it was basically a tricycle with extra maintenance. It didn’t have a cover, lights, or mirrors. It couldn’t go far and required a lot of water and oil. The car needed three hands to operate, so two drivers were required.

The Pursuit of Perfection

Over the years, they added a cover, a steering wheel, a windshield, lights (at first candles, then kerosene lights, then light bulbs), rearview mirrors, brakes, and turn signals. Slowly but surely, they improved every single thing multiple times over. It went from 3 to 4 wheels, the engine was more efficient, and the car got faster. It needed less water and oil, and they learned how to make it weigh less and cost less.

Not only was everything on the car refined, but people had to put an incredible amount of infrastructure in place. For a long time, both cars and horses were on the roads together (and the loud cars scared the horses!). There was nowhere to buy the supplies needed to go on an extended trip – nowhere to buy oil and no way to store all the water required. There were limited road rules, and rules that did exist were created with slow horses in mind.

Some early purchasers took a considerable risk on an expensive vehicle, banks that loaned the car makers money, investors, and people starting or changing their businesses to make things like tires, mirrors, and windows.

Beyond that, people were scared of the first cars, and some thought they were possessed because they went on their own (with no horse). The original makers had to overcome public fear of these then-crazy vehicles.

The number of things that had to happen to make our modern cars a reality is astounding. And the innovation has continued on and on for decades through today.

Two things struck me while learning about cars: 1. a million improvements (both small and large) resulted in incredible progress, and 2. One person’s invention or improvement inspires others and allows many to use their skills and creativity.

It seems that every new invention starts as sub-par, but it’s a starting point for all of the innovations to come. The first cell phones only made calls and were unreliable and impractical due to their enormous size. The first TVs had a single channel, were black and white, and you had to get up to turn them on and off.

The courage to put the crappy product out there and then the relentless quest for improvement makes the difference: the big and small ideas.

So, what did I do with this information and newfound motivation? To put it simply, I found the courage to low my bar and tried to take more minor actions that moved me in the right direction

I got small things done, adding to bigger things in the end. For example, if I didn’t have time to organize my whole closet, I hung up five shirts. Instead of working up an elaborate project plan in one case, I just did the first few things I knew needed to get finished. When short on time, meditated for five minutes instead of fifteen. I looked for opportunities to make progress without perfection.

After a couple of weeks of focusing on making small progress whenever possible, I did feel less overwhelmed and more on top of things. The little things I got accomplished were noticeable to me.

My challenge to you is to do it in your life. We’ve all got things nagging at us – that business you want to start, that degree you want to get, that break you want to take, that job you see in your daydreams. How can you take one baby step in that direction? Even if the product sucks, your skills are sub-par, and you have no training. There’s only one way to get better: to start.

After over 100 years of perfecting the gas-powered car, and despite decades of minor improvements in hybrid and electric technology by traditional car makers, Tesla came out of nowhere with an all-electric vehicle that people actually want to drive. It’s well designed, has plenty of range, and is fun. Tesla has overcome many standard concerns, including how to charge on long-distance trips with superchargers across the country.

Tesla’s success has traditional automakers struggling to keep up. They are adjusting to new technologies and changing how they make, sell, and service cars.

In other words, you can constantly challenge the status quo. Even in an industry with enormous barriers to entry, including financing, unions, heavy regulatory burdens, and a massive mountain of other challenges, the right people with determination, smarts, and creativity can disrupt.