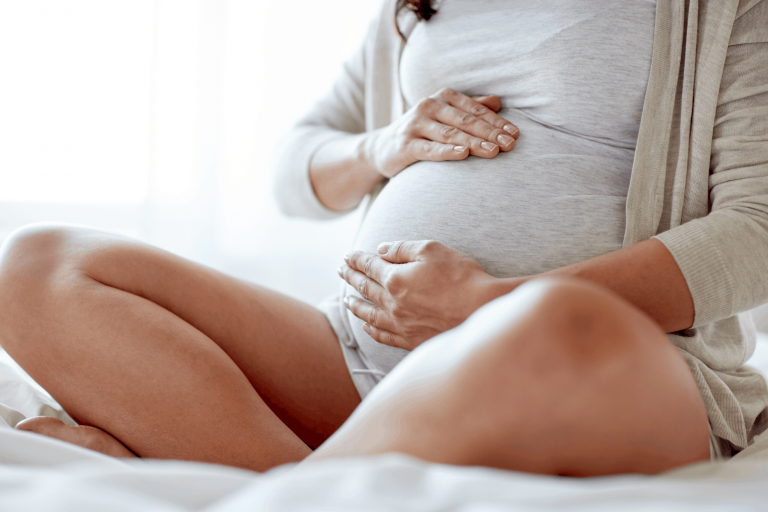 Wondering if you should start or keep doing Pure Barre during your pregnancy? Each woman must answer this question for herself, but my experience doing Pure Barre through most of my pregnancy was awesome and a game changer.

Before we get to the pregnancy part, though, you should know I’m a long time Pure Barre lover. Before getting pregnant, I regularly took 3 or 4 classes per week. I was in relatively good shape overall and had no known health concerns.

When I found out I was pregnant, I asked for my doctor’s advice about continuing Pure Barre. She said that since I had already been regularly taking classes, I should keep doing it and listen to my body.

This was baby number 3 for me, and I was considered high risk due to my “advanced maternal age” (i.e., over 35). Otherwise had no other high risk or complicating factors.

I took Pure Barre classes through 36 of the 41 weeks of my pregnancy. It was more difficult than usual, and I had to make certain modifications during class. But I also felt so much better during this pregnancy, despite being quite a bit older than with the first two.

1. I couldn’t breathe as easily as normal, which was a surprise to me. I only took Pure Barre Classic while pregnant (no Empower or Reform), which is not cardio intensive.

2. I had to be careful about standing up quickly. After stretching or doing any floor moves, I had to stand up very slowly, or I would see spots and feel light-headed.

3. I had to modify certain moves, including lying on my belly and twisting. See more on modifications below.

4. I was sweatier and had to drink more water during class. I focused on staying hydrated, which seemed to make everything easier, and luckily I was more thirsty during class.

5. My balance was terrible! After about 20 weeks, I had to be careful about keeping my balance since your center of gravity shifts forward when pregnant. This meant I had to work hard to keep my balance when on my toes or when standing on one leg.

You should make certain modifications during Pure Barre classes while pregnant. Your teacher will tell you what to do differently, but Pure Barre has also done short YouTube videos giving you all the info. Check out the playlist below.

It’s so important to protect your body when pregnant, and I found that the teachers were quick to correct me when I had bad form or should modify a move. They ensured I didn’t have any injuries or other issues during class.

Despite the modifications and difficulties in class, the results were incredible.

Keep in mind this was my third pregnancy, and I was 38 years old. My full-time job kept me on my toes – I was running from building to building all day to attend meetings. I also had two kids with many activities to get to and an active life.

It was a tough nine months, but I kept up with my family and had a good time doing it. It was my most physically capable pregnancy by far. I didn’t have much control over my life’s pace at that point, but I know Pure Barre helped me keep up.

I stopped taking Pure Barre classes at 36 weeks pregnant. My stomach muscles seemed to be separating, and I didn’t want to do any damage. I was also exhausted by that time. I wanted to sleep and rest. However, other Pure Barre regulars let me know they took classes just days before delivering a baby.

When delivering my baby, a nurse and one of the doctors commented on my abdominal strength. I pushed the baby out in record time, although it might just be the 3rd child.

Pure Bare helped me stay in amazing shape (for a pregnant person) and let me keep up with my crew.

A Case Study (On Myself)

Working out: I was in pretty good shape going into these two pregnancies. However, I quickly declined physically and mostly walked to stay in shape. Near the late middle and end of my pregnancies, I was not doing much of anything.

Status: I was always tired and went to bed early each night. I had the most swollen ankles you can imagine and had difficulty walking around the neighborhood with my husband because my legs felt so heavy.

During these pregnancies, I had to ask my employer and co-workers to make accommodations for me. I quit traveling (even by car), quit leaving the building I worked in for meetings, and had to slow my pace of work down quite a bit.

The security team at work even offered me a parking space right in front of the building so I didn’t have to walk so far. I stubbornly declined the spot and continued to walk into work at a snail’s pace every day.

I had to push for over two hours with the first baby and yelled at the nurse that “I am not an athlete” when she wouldn’t give me a long enough break. Note: I later apologized for my bad behavior, and she was incredibly kind and gracious.

To sum it all up, while there were some great things about these pregnancies, including the wonderful babies that came at the end, I did have a lot of physical difficulties in the last half of each.

Working out: as previously mentioned, I did Pure Barre 2-3 times per week for the first 36 weeks. I also did quite a bit of walking.

Status: I was tired some times, but my exhaustion level felt different than the first two. I took a trip to Disney World with my kids and my husband, walking through the park for five days with no issue. This was a major accomplishment in my eyes.

I continued to run around for work meetings, although at a slower pace than normal. By some miracle, I didn’t feel the heaviness in my legs and didn’t have significant swelling with this pregnancy.

I could keep up relatively well with my two older kids, going to soccer games, track meets, dance classes, and more.

Of course, I took things much easier in general while pregnant, but Pure Barre helped with strength and stamina. My energy level was so much higher!

The sleep deprivation, hormone swings, and stress of life with a baby were as real as ever. But I gained my strength back slowly and enjoyed an hour break from it all during each Pure Barre class. I also got to see neighbors and other familiar faces in class. They helped me feel less isolated during those early months with a baby.

I’ve written before about the positive Pure Barre environment, but during and after pregnancy it was 10 times as supportive. I hardly went to a class where someone in the class didn’t tell me I was doing great, I looked great, or I was inspiring them to work harder. The love and support I felt, especially when I felt enormous and unmotivated, helped me keep going.

If you are considering Pure Barre, I recommend you try it. If you are currently pregnant, ask your doctor (of course), but I found it to be an effective way to stay in shape, helped with a smooth delivery, and helped me get back in shape after the baby.

Pregnancy is a time to listen to your body and do what feels right. It is a time to rest more, reflect more, and soak in every moment while your baby grows inside you.

While I loved Pure Barre during my last pregnancy, I know everyone will not enjoy it. You may be more comfortable walking, doing yoga or trying a less intense exercise. Regardless, I hope this was helpful and wish you a safe and enjoyable nine months with baby!